Skulking off to some quite corner of the office for salat may soon become a thing of the past for employees of Bradford City Council under new proposals to establish dedicated prayer rooms. 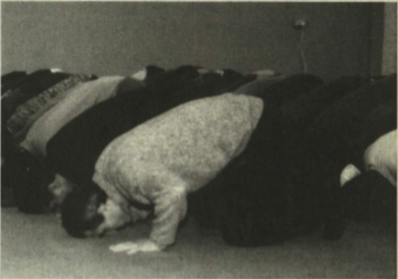 The Council has confirmed that it is looking into the possibility of refurbishing two rooms in each of its city centre buildings at a total cost of £3000 so that staff no longer have to make do with draughty broom cupboards or take time off to go to nearby mosques.

Councillor Diane Fairfax, the council’s Labour Group Acting Chief Whip, said the plans had been drawn up in response to demands from employees, elected members, shop stewards and external organisations.

She said: “The Council is committed to providing for the cultural religious needs of the people

who use its buildings – including staff, members and visitors – and these considerations support the Code of Practice on Religious and Cultural Needs which we follow as a multi-faith employer.”

“Bradford is a multi-cultural city and proud of its diverse communities and workforce so it is only right that we should look at such requests from members of different faiths.”

The proposals have yet to go before a committee for approval but one potential source of opposition has been pre-empted by the reference to a multi-faith facility rather than one exclusively for Muslims – although in practice they will be its main users.

Opposition to the plans has already come from Margaret Eaton, leader of the Council’s Conservative Group who said she did not consider it an appropriate use of public money.

“The vast majority of taxpayers would object to this. The Council is about providing public services and if people’s beliefs and practices make it impossible for policy may also have the bonus effect of encouraging more people from the community to apply for local authority jobs. “What the Council is saying is that we care them to deliver then they have to consider their position.”

“Staff already have flexible terms and conditions and there is a room in the Social Services build- ing that operates as a prayer facility. It has led to unnecessary strains and stresses with other staff who have had to cover while their col- leagues have gone off to pray.”

Ms Eaton added: “I just don’t think people should be taking time off work to pursue their recreational or religious interests.”

Mr Ahmed added that the new about our workforce. There is a tendency for Muslims not to apply for such posts because ‘it’s not for them’. Hopefully they will now see that this a local authority that encourages a diverse workforce.”

The council’s decision to con- sider the proposals also marks a small victory in identity politics for the Muslim community which has long campaigned for recognition as a religious as well as ethnic group.

“The faith dimension has been an integral part of the Council’s equal opportunities policy since 1982,”said MrAhmed.

Despite the claims to pioneer- ing policy, Bradford Council still refuses to break down its employees by religion although it does so for race. Muslims are estimated to make up half of the 2,300 Bradford Council employees from the so-called ethnic minorities.